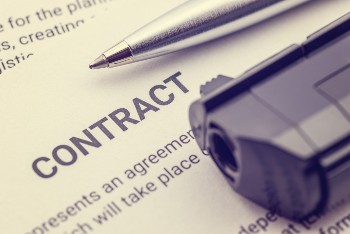 Contracts are an important part of doing business. As a business owner, you may have contracts with employees, suppliers, vendors, service providers, property owners, municipalities, and more. It is essential to the smooth operation of your business that these contracts are written to protect you and that you deal with broken contracts swiftly. Business attorney Frank Steinberg helps with both drafting custom contracts and litigating breach of contract claims.

The best way to avoid future problems with any kind of contract is to have one written specifically for the relationship you are negotiating. Downloading a free contract from the internet or signing a contract supplied by the other party can lead to problems later on. Language that is considered "standard" in one-size-fits-all contracts can cause major problems for your company. When you hire an experienced business attorney to draft your important agreements, you can ensure that the terms are favorable to you and that you have legal recourse if the contract is broken.

Breaches of Contract Can Interrupt Business and Impact Your Bottom Line

You rely on contracts to hold people accountable for the duties they have promised to perform. Contracts should also spell out what the signee's responsibilities are, and what actions (or inactions) would be considered a breach of the contract. When a subcontractor misses a deadline, an employee violates a confidentiality agreement, a supplier fails to deliver goods, or a vendor doesn't pay for products, your business suffers.

A material breach of contract—one that renders the contract irreparably broken—allows you to seek a legal remedy, which could include one of the following:

One option is to seek compensatory damages, which is a monetary payment that covers the financial losses caused by the breach of contract. If the law was broken in the course of breaching the contract, you might also seek punitive damages. If the contract specifies a dollar amount for breach of contract—known as liquidated damages—you would be entitled to those damages. For example, a contract might specify that a subcontractor must pay $100 a day for every day they go over a pre-arranged deadline.

In addition to collecting damages, a material breach of contract also allows you to terminate the contract. If, for example, you have a five-year contract with an employee and they commit a major breach in the first year, you do not have to honor the next four years of the contract terms.

In some cases, monetary damages are not enough to restore you to the position you were in before the breach. In this case, the party could be required to uphold the terms of the contract, no matter what the cost is to them. For example, if you contracted to buy a specific building and it was sold to someone else, giving you money does not get you the building. In this case, the court could order the other party to sell the property to you.

Again, it's important to remember that if the contract was drafted properly to begin with, your options for legal remedies would be favorable to you. Boilerplate contracts cannot take your unique business and specific terms of the agreement into account. If it is an important contract, always trust it to an attorney who is willing to take the time to understand what your business needs in a contract and what an appropriate remedy would be. You also want an attorney who is skilled at drafting a reasonable contract that will hold up in court.

Get Advice You Can Trust

At Steinberg Law, LLC, we believe in building relationships based on trust, honesty, and mutual respect. No matter what kind of contract you need to draft or what kind of contract litigation you are facing, you can count on us to help you evaluate your options and determine the best way to move forward. We serve clients throughout New Jersey and are well-equipped to represent your interests in federal court if necessary. Contact us today to request a free case review.