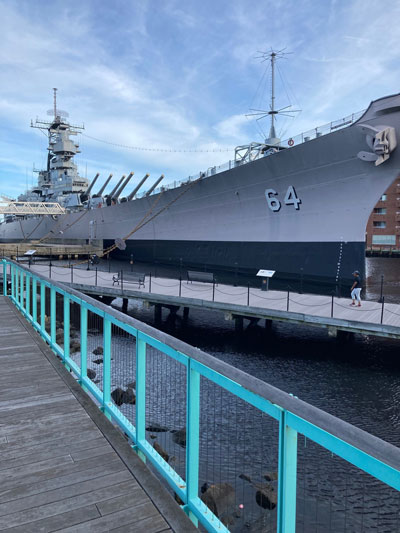 I'm just back from the first meeting of the Lawyer Pilots Bar Association since early March of 2020.  This great organization, which I was honored to serve as president, is dedicated to training lawyers in aerospace law and strengthening the ties among them.  We met in an unlikely place: Norfolk, Virginia.  Despite some hot and humid weather it turned out to be a terrific place for a meeting, Hurricane Henri notwithstanding.

Norfolk is a military town, home to the US Navy's main east coast base.  It's a friendly city, where strangers say hello on the street.  The town's waterfront is dominated by the now retired battleship USS Wisconsin, pictured above.  Armed with 16" guns, Big Whiskey is an imposing sight.  She can put munitions on target from 23 miles away.  One projectile weighs 2700 pounds.  That's like launching a small car --- one that explodes --- at an adversary.

We had nine talks on various aspects of aviation law.  Day 1 included a roundup of FAA and NTSB regulations and enforcement practices, a sobering look at little known risks of using corporations and LLC's to own aircraft, and a lawsuit involving a crash at a remote mountain airstrip owned by the government.

Day 2 saw discussions of aircraft appraisals --- a mundane but critical component of aircraft purchases and financing, legal considerations of owning and maintaining a personal runway for private use --- there are more of them than you might think, and an update on the rapidly changing field of drone law.

Day 3 wound up with fascinating detours into the rules and ethics of warfare (aerial and ground-based), the basics of Title IX law, and ethics.

Having put programs like this together personally, I can tell you how valuable the information is, especially in a narrow field like aerospace, and how much work it takes to do it well.  The speakers this year were uniformly excellent and generated many follow-up questions and spirited discussion.

Our next few posts will look into some of these subjects in greater detail.